After recently writing a blog about beer, I thought it was appropriate and timely to write about the history of coffee, another highly desired beverage. Coffee shops and coffee are literally everywhere all over America and it is estimated that 100 million people in America drink coffee on a daily basis. I’ve seen on one square block a coffee kiosk, a coffee shop, a grocery store with a coffee shop, and then another coffee shop right across the street (4 places in one block). If you’re like me, your body treats the first few cups of coffee like air or water and the next few as the upper/motivator/functioning juice.

It is believed that coffee dates back all the way to the 15th century in the Shrines of Yemen (an Arab country in eastern Asia). It is believed that “…coffee seeds were first exported from Eastern Africa to Yemen, as the coffee plant is thought to have been indigenous to the former. Yemeni traders took coffee back to their homeland and began to cultivate the seed. By the 16th century, it had reached the rest of the Middle East, Persia, Turkey, and northern Africa. From there, it spread to Europe and the rest of the world.” https://en.wikipedia.org/wiki/Coffee

Coffee was extremely popular in Europe far before it was popular in America and that is seen by not just the way we choose to name our coffees but by brewing techniques. “In the 19th century, coffee was a huge business in Europe with cafes flourishing across the continent. But coffee brewing was a slow process and, as is still the case today, customers often had to wait for their brew.” http://www.smithsonianmag.com/arts-culture/the-long-history-of-the-espresso-machine-126012814/?no-ist

Inventor Angelo Moriondo of Italy was like, “Come on. You yelled wrote my name out on my cup as ‘Angel Moron do’ and you took forever to make my latte.” Not really, but he was granted a patent in 1884 for a “Coffee Making Machine.” This essentially was a two broiler system that first pushed water through coffee grounds and then produced steam which spread over the liquid to complete the process. His invention was the first to use both water and steam and was created for the Turin General Exposition (I believe a fancy science fair). http://www.smithsonianmag.com/arts-culture/the-long-history-of-the-espresso-machine-126012814/?no-ist

Unfortunately, Moriondo’s patent didn’t lead to a huge product base or business. Instead two men, Luigi Bezzerra and Desiderio Pavoni made several coffee machines and secured several patents that were essentially better than Moriondo’s but were also different-they were for individual or small family use (not extremely large bulky machines). In 1901, Luigi Bezerra invented the “Tipo Gigante” which was known as the first espresso machine. “Legend has it; the initial reason for Luigi creating the espresso machine was to reduce the amount of time that his employees spent on their coffee break.” http://www.gocoffeego.com/professor-peaberry/history-of-coffee/1900

In 1905, 4 years after Berzerra’s first espresso machine was made, Desiderio Pavoni decided that he didn’t like the flavor that came from Bezerra’s machine. It was too bitter and felt the bitterness came from the steam and from there being too high of temperatures for the coffee grounds. He bought Bezerra’s patent and decided that coffee taste perfection was required and that he would do what it took to get there. “Desiderio’s solution; perfection in a cup requires one to brew the coffee at 195 degrees and 9 BAR pressure. His moment of brilliance sets the gold standard for all espresso machines to this very day.” http://www.gocoffeego.com/professor-peaberry/history-of-coffee/1900. Note: The maker/writer of this coffee timeline also highlights decaf and instant coffee but I’m going to leave that out for time and other reasons.

The world of coffee and related patents won’t stop and can’t stop like Miley Cyrus or my caffeine addiction. Patents of coffee related devices aren’t merely limited to espresso machines and coffee makers. Here are some other coffee inventions/processes that are extra hot, historically:

Infusion Brewing- putting ground coffee in a linen bag; popular in France starting in 1710; The biggin, originating in France ca. 1780, was a two-level pot holding coffee in a cloth sock in an upper compartment into which water was poured, to drain through holes in the bottom of the compartment into the coffee pot below. Let’s hope that sock was clean. https://en.wikipedia.org/wiki/Coffeemaker

Vacuum Brewing-heating water in a lower vessel until expansion forced the contents through a narrow tube into an upper vessel containing ground coffee. When the lower vessel was empty and sufficient brewing time had elapsed, the heat was removed and the resulting vacuum would draw the brewed coffee back through a strainer into the lower chamber, from which it could be decanted. Id.

The Percolator (Early version patented by James Nason of US in 1865, modern version we know patented in 1889 by Hanson Goodrich) “Goodrich’s patent description varies little from the stovetop percolators sold today. With the percolator design, water is heated in a boiling pot with a removable lid, until the heated water is forced through a metal tube into a brew basket containing coffee. Id. 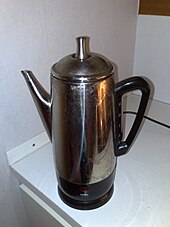 The French Press: (Patented by Italian designer Attilio Calimani in 1929) Coffee is brewed by placing the coffee and water together, stirring it and leaving to brew for a few minutes, then pressing the plunger to trap the coffee grounds at the bottom of the beaker. Id. 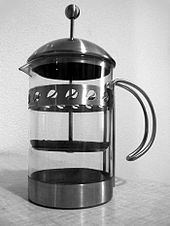 The Moka Pot: (Patented by Luigi De Ponti in 1933). The moka pot is a stove-top coffee maker which produces coffee by passing hot water pressurized by steam through ground coffee. Id. 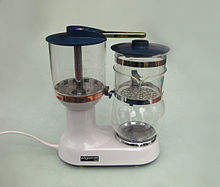 Then as you know drip brew electrical coffee makers became popular everywhere. There were simple ones for coffee shops (that are still used today at a Denny’s near you) and home coffee makers that promise various features (coffee or espressos, a little steam nozzle that breaks after the 4th use, and so on). Transition to today where coffee pod machines (Keurig, ie.) have taken over the world. However, they have not clouded the desire for true baristas to make coffee the old way. The only pod they want is not coffee related, but instead a description of the size of their living space. I’m personally very pleased there are now a variety of ways to order your coffee (both old and new).

At Mohr IP, we not only have clients who have utilized our services for their coffee-related intellectual property, our conference room is well stocked with various types of coffee pods for our single-serve machine. Decaf, tea, and water are also an option. Caffeine energizes us, but so do clients who have exciting new ideas. Make your 30-minute no cost consultation appointment today.

This entry was posted in Uncategorized. Bookmark the permalink.